Chapter 2 of every Baby-Sitters Club book was an introduction to each and every currently active member of The Club. As a regular reader, I remember skimming Chapter 2’s – until the description of Claudia’s clothing appeared – and then skimming again until Chapter 3.

So in this post, before I start reading, I’m going to do my own Chapter 2, and recap what I remember of the girls/lone guy after a 20-odd-year hiatus. Feel free to do what I remember doing with almost all BSC chapter 2’s; skipping to the next chapter. I’m not googling the question here or checking wikipedia – any misinformation or misspelling of names is er…all part of the experiment.

This is a post to check what I actually remember and look at what leaps and bounds my brain’s made over time to make sense of it all.

I remember Kristy being a tomboy with long-ish brown hair in a ponytail, who loved sports and any activity where she could boss people around, but naturally hated being told what to do. She comes up with the idea of the Baby-Sitters Club, though I don’t remember how, or why. I think she’s friends with Mary-Ann Spier and lives across the road from Claudia Kishi? Or do all of them live next door/across the road from each other? Is that what starts it all?

Kristy lives with her mum and a bunch of brothers, though I can’t remember how many. I remember Kristy hating her mother’s boyfriend, Watson, but her mother (rightly) ignores her daughter and follows the money her heart and marries him in one of the first books. The whole family’s then moved to a posh district and becomes this absurd parody of The Brady Bunch. And because six or so children isn’t enough, they adopt another kid if I remember correctly.

I remember Kristy wearing a dress. Once. 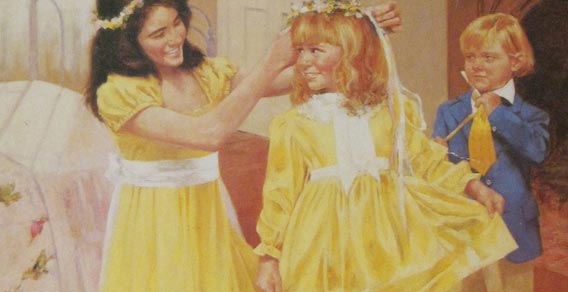 She’s the sort of girl I expect would have become a PE teacher when she grew up, a lot like the PE teacher out of Clueless, who existed to torture un-sporty people like the 13-year-old version of me. 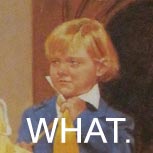 Claudia has her own phone line (every pre-teen’s dream), so Kristy convinces her to host weekly BSC meetings in her room, and makes her number public by distributing it on fliers (this is of course, the 80’s – pre-digital, pre-mobile. Pre-creeper, pre-demanding-client, etc). She’s Asian and is basically a 13-year-old Lady Gaga, fashion-wise. I remember that she’s an artist; she hides junk food all over her room (her best friend is a diabetic – LAWL!) in uber-secret places like hollowed-out books; and has the weirdest fashion sense known to humankind. I remember jar-lid earrings and leggings, large, white man-shirts (was she stealing clothing from her father?!) and tights with clocks on them.

At the moment I’m wearing lavender plaid cuffed pants with suspenders over a green shirt with buttons down the front, a matching lavender beret (and not just because I’m at my easel), and fleece-lined, high-top sneakers which I must admit are uncomfortably hot, but they look great. Also, I’ve got on earrings shaped like Christmas tree lights that actually blink on and off. I’m not sure why I chose to wear them, since it’s nowhere near Christmas, but I love jewellery, like to make my own sometimes, and have pierced ears.

Her outfits were legendary and if you didn’t want to be Claudia, you wanted to be best friends with Claudia. 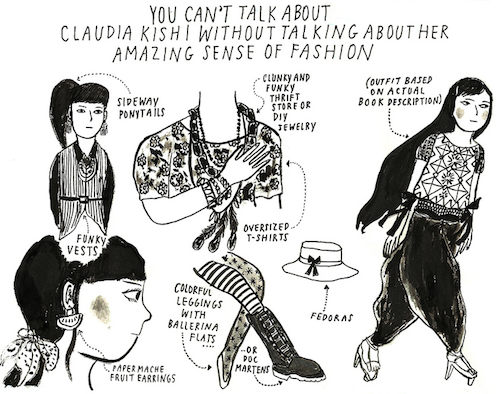 via What Claudia Wore

Claudia’s clothing is discussed at great length at What Claudia Wore, so go check that out and have a laugh. Besides clothing, I remember a sister. Janine. Super smart and super boring, because Claudia said so.

I’m betting after graduating from the 8th grade (after 38 or however many years) she’d have become an immensely happy penniless artist loving her life in Budapest.

I remember a HUGE kerfuffle when Mary-Ann decides to cut her hair. It’s brown and always in braids, and one day, despite her dad’s strict rules, she decides to cut it all off. 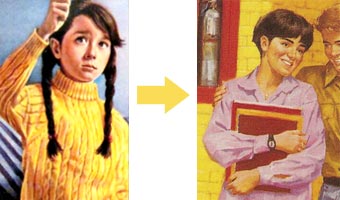 I’m remembering that Kristy sees this, somehow, as an insult that she didn’t discuss the change to her look with the committee and chaos ensues. 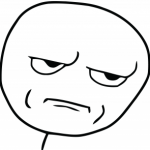 But, maybe I’m making stuff up to fill in some gaps. Mary-Ann is shy, but is somehow the only one with a steady boyfriend (everyone’s dreamboat, Logan something-or-other). Oh, and she becomes Dawn’s step-sister, after they re-hook their parents up in a way that in my head sounds like the plot to the Parent Trap, but with less Lindsay Lohan.

Does Mary-Ann have a cat? I remember a cat. She seems like the one who would own a cat.

If Mary-Ann ever grows up I’m imagining her being one of those girls who goes to university and with a new-found freedom, goes wild. I knew a girl like her. Used to stress about exams at highschool and was a straight A student; once at uni ended up in hospital with liver problems really quickly. 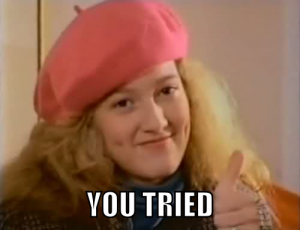 Boy-crazy, cosmopolitan, perm-wearing, heart-dotting i’s, gorgeous Stacey! Who didn’t want to be Stacey, despite the (token flaw!) type 1 diabetes? She was the coolest. She was from New York, and travelled back there all the time owing to one of her (divorced) parents still living there.

Other than perms and diabetes and sparkles and being Claudia’s best friend and frequently lying to boys about her age, I remember nothing of Stacey, though something in the back of my mind is saying Stacey was the one who occasionally called Kristy out on her bullshit. She was the sort of person who, as an adult, I could see quite easily turning into Penny from Big Bang Theory.

Despite everyone wanting to be Stacey, Dawn was my idol when I was a little girl. She had long blonde hair – just like me! She was a vegetarian – just like me! She wanted to save the planet – just like me! I distinctly remember dressing up in 6th or 7th grade for book week with my best friend Serena; she went as Stacey, and I went as Dawn, in casual jeans and a t-shirt. Nobody could have guessed we were dressed as book characters, but we didn’t care – WE knew who we were.

Dawn was from California, and her mum marries Mary-Ann’s dad after the girls find out they used to know each other in high school or something. 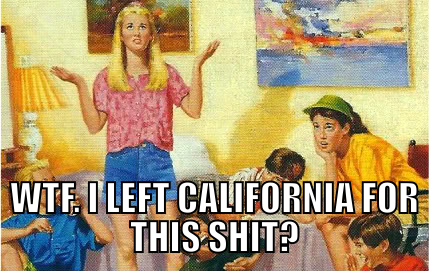 I remember Dawn always longing for California, and always eating granola, though I had no idea what it was when I was 11. Character-wise I imagine Dawn growing up and moving to Amsterdam but constantly bitching about how great California is, wearing glasses even though she doesn’t need them, and er…eating granola like a champion. Heh.

I’m sorry, Jessi, but the writers kinda sorta made you: 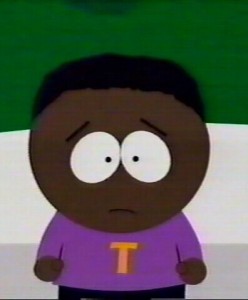 I remember that Jessi is eleven. She has a sister, and she’s a ballet dancer. I remember a big drama when she gets the lead in some dance because…reasons? That’s about it. Sorry, but the 10-13-year-old me was never that interested in the eleven-year-old characters. So I can’t imagine them growing up. I’d like to say that I see Jessi achieving her dreams of becoming a professional ballet dancer, because she had more ambition than any of the others if memory serves. I’d like to imagine that she didn’t have to resort to working in a strip club to pay the bills like every other professionally-trained dancer I’ve ever known, but that would mean I was invested in the eleven-year-old character’s development. Which I just wasn’t.

Which brings me to… 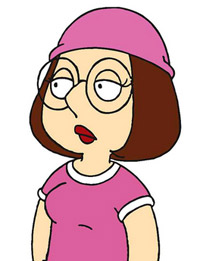 The Pikes are the Weasleys of Stoneybrook, and I remember red hair and a lot of bitching and moaning from Mallory Pike. She was the eldest of a lot of kids, and thus was somehow qualified to look after other people’s children at age eleven. There was a super-special book where they all won the lottery (!?!) and travelled to stay with Dawn’s dad in California, and I distinctly remember Mallory going mad, suddenly finding herself cashed up (because babysitting PLUS lottery) and away from parents – dying her hair blonde and wearing a ton of makeup (YOU’RE ELEVEN! EH GADS!). I remember back then wondering why anyone who had red hair would want to dye their hair blonde. You always want what you haven’t got, I guess. I feel bad for saying it but I remember little about her, short of her hair, but I just don’t remember, because I didn’t care about her at all.

Mallory wanted to be a writer, didn’t she? If I cared enough about her character, I could imagine her working on-and-off at JB Hi-Fi, resenting every customer that approaches her about mainstream DVDs, while she attempts to complete one of her seven novels she has on the go.

Sorry Jessi, Mallory, and anyone else, but…

The BSC was always the first five, to me; Kristy, Claud, Mary-Ann, Dawn and Stacey (yes, Dawn wasn’t introduced in book one. Shaddup, she was my idol).

Sorry, Logan. If Jessi was Token Black, you were Token Boy, and while I liked you, I didn’t genuinely want to know you. The series was never going to sell to boys, ever, and it was aimed at girls who were only just interested in boys. Your inclusion can only be seen in these cynical eyes as either an attempt to tell girls what a good boy was and that they were approachable, or as an accessory to Mary-Ann’s character, making us believe that she was worth wanting to be like (despite the many other candidates of pre-teen idolatry) because despite being extremely introverted, she’d attracted somebody.

Wait a minute…was Mary-Ann our Mary-Sue?! Something to look for signs of, during the re-read.

I remember that Logan is the boyfriend of Mary-Ann, and that he’s part of the BSC, somehow. I’m thinking he’s blonde. Again – sorry dude. I’m hoping that during the re-read you shine a little, because out of everyone (that I remember), I feel the most sorry for you.

I remember Karen, Kristy’s little step-sister, being a bitch most of the time, and getting away with it. Some dude who coached a baseball team that Kristy was obviously destined for, but can’t remember his name. I remember Claudia having a lovely grandmother and I think she (sadly) dies in a book.  I remember a girl that Stacey was always babysitting for – Charlotte – and that they were like sisters. I remember a cat called Boo Boo, and an old woman who lived next door to Kristy who Karen thought was a witch. I remember Janine, Claudia’s sister, who reminds me of Daria now I think about it. But, that’s it. I don’t remember plots, side characters, baby-sitting jobs, anything.

Time to read, and see how warped my memory of the BSC girls (+ token guy) is.