Book 11: They killed the dog and some other stuff happened

I looked down at Louie’s liquid brown eyes. When he moved them, his “eyebrows” moved, too. He was paying attention to everything in the waiting room.
“Do you think he knows what’s going to happen?” I asked softly.
“No,” said Mom. “I’m sure he doesn’t.”
How can we do this to him? I asked myself. We are going to kill him. We were saying “Okay, Louie, you must die now,” and not giving him any choice about it. We were going to send him into a room and let someone give him a shot so that he would never wake up.

When we’re little we develop a moral code based on influences from our families, friends, and other various stimuli. When trying to place what effect the Baby-Sitters Club had over us, we laugh and reminisce over our love of Claudia’s wacky outfit of the week.
But the quote above. Guys…I think this book, this quote, played a part in defining my stance on putting animals down. Because I’ve had that argument with my family. I don’t want to get all mushy or preachy, so I’m just going to say – I was surprised when I read that section, and I wondered whether this book defined my stance, or strengthened one I’d already been forming.

As my friend Fifi predicted last review, Kristy and the Snobs, book eleven in the Baby-Sitters Club, was kind of distressing. I’m not going to spend this entire review musing about how Louie’s death had more of an effect over me now than it would have when I was a child, because I don’t think I’d lost a pet yet, when I first read it. This is a book written for little kids, and Ann M Martin says in her author-y bit at the end that in part she wrote it to deal with her feelings about her cat, called Mouse, who was growing old and very ill at time of writing. Knowing that makes me feel good about the books, or at least the first 30-odd that were penned by Martin herself, despite their formulaic feel. It means that Ann M Martin felt she could break formula and write about something she wanted to write about.

Kristy and the Snobs deals with Kristy Thomas’ adjustment to her new neighbourhood on Millionaire Lane. She loves the Brewer mansion, Karen, Andrew and even Watson, and has gotten used to her new routine – catching a different bus to school, and paying Charlie to drive her to BSC meetings on the other side of town three afternoons a week.

The only thing – people – she can’t get used to are the idiot private school girls across the road, and their fancy-pants pets. 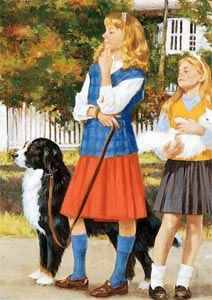 Enter Shannon Kilbourne, whose name you may recognise since by book’s end, she’s a sort-of member of the BSC, just like Logan sort-of is. Shannon goes to Stoneybrook Day School, a private school with a blue plaid uniform, and is described as being sleek and slender with a cascade of thick blonde curls. She has a Bernese Mountain dog called Astrid of Grenville.

Apart from the posh dog, Shannon sounds a lot like Stacey McGill.

I never liked Shannon Kilbourne. When we’re introduced to her, she is making fun of a sad, arthritic Collie 🙁 and on some level, I must have always associated her appearance with the death of a dog (instead of the bringing of a puppy).

Yes, that’s right – Shannon has a go at poor old Louie, for being scruffy. She’s pissed at Kristy, too, since she has territorial rights over the baby-sitting jobs on Millionaire Lane. She don’t take too kindly to Kristy advertising on her stretch and stealing her clients.

Unaware of the turf war she’s become a part of, Kristy baby-sits for Shannon’s neighbours, the Papadakises (Linny, Hannie and Sari; pets: Myrtle the turtle, Noodle the Poodle), and for the Delaneys (Amanda and Max, “the Snobs”; pet: white Persian cat called Priscilla. “She cost us $400.”).

Shannon pranks Kristy whenever she’s sitting, saying things like the house is on fire, and each time Kristy falls for it – in the case of the “fire”, she overreacts and freaks the Papadakises kids out (before checking for said fire). Kristy pranks Shannon right back by ordering a diaper delivery service to show up at Shannon’s every morning.

Shannon and Kristy keep pranking each other throughout the book (and who, I ask you, is paying the hard-working delivery drivers wages and fuel expenses, when they return to base with no money?). The girls are brought together in the end by a pizza (because pizza fixes everything) and then, the death of Louie. 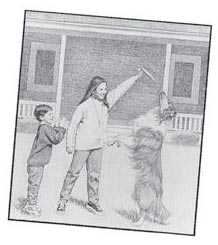 I didn’t remember Louie being put down, or the (really quite stressful) moments we see during Louie’s demise, including his walking into table legs, falling down stairs, and panicking as he loses the use of his back legs. I didn’t remember how wee David Michael was so attached to Louie, or how Karen arranged a memorial where they played “Brother Louie” on the tapedeck – the song David Michael found a long while back, that Louie used to howl to whenever he heard his name.

Wait, do they mean this song?

…or this one by Hot Chocolate?

How did David Michael find either?
(For that matter, how did anyone find anything before Google and YouTube?) 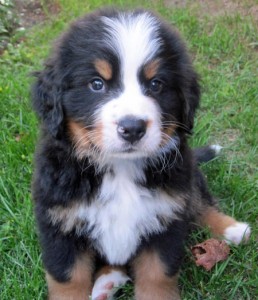 Anyway, Shannon is one of the many neighbours who attends Louie’s memorial. The next time Kristy’s sitting for the Delaneys, Shannon brings Kristy a puppy.

Astrid of Grenville’s had puppies, and if they want another dog, Shannon wants to give them one. So the Thomas-Brewer household lose Louie and gain Shannon (because that’s what David Michael says they need to call the puppy. Because having a Shannon over the road and a Shannon puppy is logical).

That’s the gist of this book. Kristy has a few classic moments, including this in the opening pages:

…there are a lot of things I can’t stand. Cabbage, blood, people who chew with their mouths open, and squirrels are a few of them.

What did squirrels ever do to you!?

We’re also treated to another look at the complex being that is Sam Thomas:

“Kristy, can’t you wear something different once in a while?” Sam asked me, eyeing my jeans and sweater.
“Why do you care what I wear?”
…He thought he was the girl expert of the world, and he was disappointed in my lack of fashion sense.

Make of that what you will, while remembering the Little Women prank call, back in Kristy’s Big Day, and the “How you doin'” moment back in Kristy’s Great Idea. Sam Thomas moments are the best.

The other members of the BSC do nothing the entire book for themselves, but each have a baby-sitting job that doesn’t contribute to Kristy’s story in any way that couldn’t have been easily cut.

Mary Anne sits for the Perkins’, who’ve moved in next door (into Kristy’s old house) and are about to have a baby; Dawn sits for her own brother Jeff, who’s all moody and “I want my father!” – setting groundwork for his eventual deportation back to California, I guess. Stacey sits for the Delaneys – the Snobs – and uses psychology on them to stop them from bossing her around – 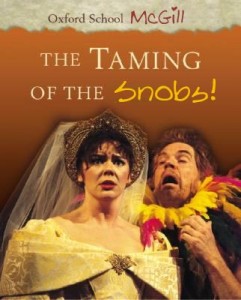 You have to know a little psychology. And I happen to. Know psychology, that is.

Hurr hurr, okay Stacey. Psychology ends up being exaggerating every demand they make of her:

It wasn’t long before Max knocked into his glass, sloshing milk over the sides.
He stared at the puddle on the table. “Wipe it up, Stacey,” he commanded.
“Could you finish spilling it first, please?”
“Huh?” said Amanda and Max at the same time.
“Finish spilling it first. You’ve only spilled some of it. I don’t want to have to stand up and get the sponge now if I’m just going to have to get it again in a few minutes. And by the way, since you like me to clean things up for you so much, you ought to know that I’ll be happy to give you a bath later. I’m sure you’ll want me to clean you up, as well as everything else.”

After she trains them to wipe up after themselves and be more polite, she teaches them a game called Snail, which is like hopscotch, but looks like this: 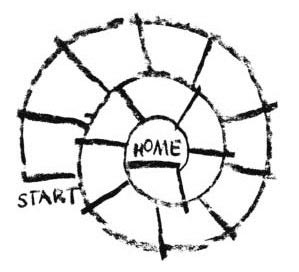 Claudia sits for the Pikes, to remind us Mallory exists, I guess. Her sitting job just involves a lot of running around serving the Pike children, who all have chicken pox and are quarantined to their rooms for some reason.
Mary Anne and Claudia’s sitting jobs could have been left out and it would have changed nothing about the main story arc, or effected any future stories. The Dawn/Jeff saga could have been put into any other book, and felt a bit oddly placed in this one.

And…that’s it. No outfits. No (unidentifiable) junk food. Just Kristy, becoming friends with the neighbours, and the death of Louie Thomas.

Sorry for the weird, un-funny review; it was inevitable with the subject matter.
Hopefully in Claudia and the New Girl, we’ll be back to laughing about how the BSC girls overreact to more trivial matters.

Feel like tearing up but not quite crying for 40 minutes? Download and read Kristy and the Snobs for yourself, for Kindle, via Amazon.