Title is relevant, I swear. Sorry this review’s taken so long.

Little Miss Stoneybrook…and Dawn begins with a Baby-Sitters Club meeting, and the induction (“Induct? Who’s Kristy kidding?“) of Jessi and Mal into the BSC. There’s no slumber party or pizza toast – which annoys Dawn, who figures the only reason she wasn’t officially inducted into the club when she joined was because Kristy was jealous of her.

The jealousy rises like bile, when Dr Johannsen calls and specifically asks for Claudia to sit for Charlotte. While this request isn’t Claud’s fault, it results in Kristy, Mary Anne and Dawn huffily reminding the others what great baby-sitters they are, too. Claudia – with a restrained sigh, I imagine – replies “Oh, you’re all good sitters. Really. Char just misses Stacey, that’s all. This is a special job.”

After some more phone calls, the induction ceremony is crammed in at the end of the meeting, and involves Mal and Jessi standing with their hands on the club notebook and repeating after Kristy, “I promise to be a good, reliable, and safe sitter, and to be true to the Baby-sitters Club forevermore.”

After which, Dawn and Claudia roll their eyes, and Mary Anne bursts into tears, proclaiming, “Oh, that is so beautiful!”

Special Jobs keep coming. While Charlotte was only asking for Claudia because she wanted to feel closer to Stacey, the other girls all end up getting Special Jobs of their own fairly soon, thanks to the Little Miss Stoneybrook Pageant. 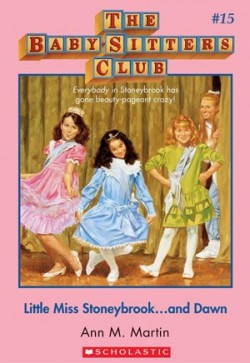 Claudia reads out the article about it in the Stoneybrook News, and then drops the paper and ‘makes a face’ (I’m hoping it wasn’t the ham face):

“I don’t know. I think pageants are sexist. I don’t care what the article says. People go to pageants and they think that the only thing little girls are good at is dressing up and looking cute. That’s…that’s…it’s like…what’s that word that sounds like tape deck? Stereosomething.”

The other girls are quick to come to similar conclusions.

“Sexist,” said Kristy. “Who’d want to do a dumb thing like be in a pageant?”

“Oh, no! I don’t believe it!” Mallory cried. “A pageant here in Stoneybrook. What a disgrace!”

Mallory somewhat overreacts because she worries that her little sisters, Claire and Margo, will want to enter the Little Miss Stoneybrook Pageant if they hear about it.

“Pageants are so sexist. Do you ever see boys competing for a crown? For Little Mr. America or something? No,” Jessi answered herself.

Dawn and Mary Anne aren’t so sure, and somehow, they quickly turn Kristy to their way of thinking; that it could be fun, for a little kid, to get up on stage in a fancy dress.

“True,” agreed Kristy. “I guess a pageant could be sexist…but fun.”

OK, I swear that’s the last time I’ll use that gif, it just works so well for the majority of the decisions made in this book. Back to the special jobs and the jealousy within the BSC. At the next meeting, Kristy asks Claudia how the job with Charlotte went, and despite Claudia looking uncomfortable about it as she explains it was fine and no big deal, everyone is giving her the evil eye by the time she’s finished talking. Then Dawn thinks;

And I suddenly felt this incredible urge to prove to everybody, especially our new junior members, that I was as good a baby-sitter as Claudia was, if not the best sitter in the club.

The girls, yet again, start to retell their claim-to-fame aren’t-I-responsible sitting jobs; Mary Anne brings up the infamous Jenny Prezzioso emergency; Kristy brings up how she caught the Phantom Caller (AKA Alan Gray) – and then before Dawn can remind them of the job she had in California where she put out the fire again, things go from jealous to super awkward, when Mrs Pike calls and asks for Dawn to take care on a Special Job of her own.

Claire and Margo have heard about the Little Miss Stoneybrook Pageant. They’re desperate to enter, but Mrs Pike doesn’t have time to get them ready for it, so she asks Dawn – who lives close by – to help them prepare – pick outfits, rehearse for the talent competition, learn to greet judges, teach them to answer the sorts of questions they’ll be asked, etc.

Dawn considers for a moment, and realises that this is her way to prove just how good she is with kids, and also, a great way to get back at Kristy just a little bit for the induction ceremony. What a great baby-sitter.

I really wanted to use the Jennifer Lawrence gif again, but I didn’t; see how I’ve grown?

Kristy is pissed that Dawn accepts the job, while Jessi rolls her eyes, Claudia and Mary Anne look thoughtful (really, Ann M Martin, why not just say they didn’t react?) and Mallory responds with the adequately dramatic:

“Oh, no. My sisters. My baby sisters. They’ll be contaminated. They’ll be brainwashed. If I become the sister of Little Miss Stoneybrook, I will absolutely die!”

Kristy, Mary Anne and Claudia all jump on the bandwagon relatively soon after Dawn, also wanting to prove that they are the better baby-sitter – because nothing says good baby-sitter like dragging a child through the beauty pageant system. 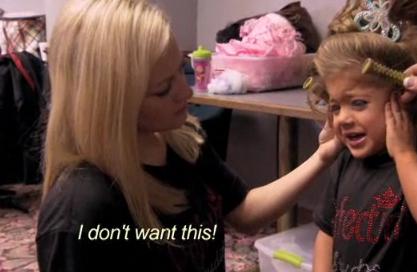 Kristy convinces Karen to enter – though it doesn’t take much convincing, naturally, with Karen being the attention-seeker she is. Karen’s talent is singing fifteen verses of “The wheels on the bus go round and round” while wearing her yellow flower-girl dress from the Brewer-Thomas wedding.

Mary Anne convinces her neighbours, the Perkins, to let her help their eldest daughter, Myriah, enter the pageant. Myriah is five-and-a-half, and can apparently sing, tap-dance, act, perform ballet, do gymnastics, and probably leap tall buildings in a single bound. As far as Mary Anne is concerned, Myriah is the winner. Myriah’s talent ends up being singing “The Good Ship Lollipop” while tap-dancing, holding a giant lollipop.

“You could enter, Charlotte.”
“Me!” Charlotte exclaimed. “What for?”
“Don’t you think it would be fun?”
“Not really. I’d rather read.”

Claudia doesn’t want to be left out of preparing someone for the pageant, so she works on shy little Charlotte – and convinces her to enter. Charlotte sadly tells Claudia that she’s not good at anything but reading – then wonders if she could do a dramatic reading of one of her favourite books. But then –

Charlotte scrunched up her face in thought. “I don’t know,” she said. “See, the thing is, I’m not pretty.”
“Being pretty isn’t the point,” Claudia told her. “It really isn’t. You have to have poise and talent and be smart.”

The majority of the pageant work revolves around Dawn looking after Claire and Margo Pike, first figuring out what their talents will be, and then rehearsing those talents. Claire ends up singing “I’m Popeye the Sailor Man”, while Margo’s talent is…really…something:

Margo returned to the room carrying a banana. “Watch this!” she exclaimed. She sat on the floor, leaned back against her hands, picked up the banana with her feet – and peeled it with her toes.
“This is the house that Jack built,” she said, after the banana had been peeled. She took a big bite. “Thish ish the mart, that ray in the housh that Jack bit.”

Aside: Don’t…don’t try to google an image to fit this. Just don’t.

Dawn tries to convince the girls to do more ‘traditional’ pageant talents – to sing sweet songs, like “Tomorrow”, or “Somewhere Over the Rainbow” (does Dawn realise the RANGE that’s needed for that song? I doubt a five- to eight-year-old has it), but Claire and Margo have decided on what they want to do. After Dawn tries to teach them to curtsy and greet judges (there’s a lot of falling over), she decides that they’re “not pageant material” and wonders what she’s gotten into.

Throughout the book, Dawn, Kristy and Mary Anne turn into your classic stereosomething (lol) pageant mums – spying on each other, trying to sus out each other’s kid’s talents and readiness. But Claire and Margo Pike, Karen Brewer, and Myriah Perkins let it roll off their backs and insist on having fun with it.

And then there’s Claudia and Charlotte, who both amble through pageant preparation like they got on the wrong bus in a foreign city and are too scared to ask anyone for directions.

Both Jessi and Mallory stick to their original opinions throughout the book, and abhor everything pageant related.

[Claire and Margo] each found a small paperback and began sashaying around the living room with the books on their heads.
“Oh, that is pathetic,” said Mallory to Jessi. “Look at them. They’re going to think the only thing that matters in their lives is beauty and poise. They’ll grow up believing they can only be pretty faces, not doctors or lawyers or authors.”

Pageant Day arrives, and Dawn and the Pikes get their first look at the other five-to-eight-year-old contestants – some who are wearing nail polish and makeup, including one of those typical child pageant stars named Sabrina Bouvier, who, as Dawn puts it, speaks and acts like she’s twenty-five. 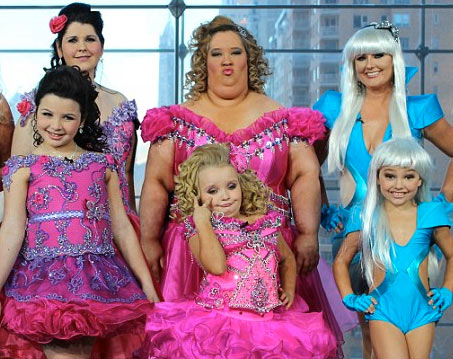 Once the pageant actually begins, the BSC start to find it funny, cracking jokes and being supportive of each other’s charges. The talent portion goes off without a hitch – until Charlotte, who gets stage fright, forgets her Charlie and the Chocolate Factory passage, runs off the stage in tears and gets taken home straight away.

“Claire,” said the judge, “what do you hope for most of all?”
I held my breath.
“Santa Claus,” whispered Claire, looking terrified. “I hope he’s real.” 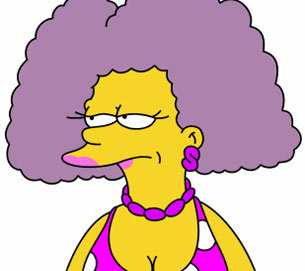 All of the BSC members comment constantly about how Myriah should have won – how she was robbed of the crown by Sabrina – and Myriah doesn’t seem to care. As second place winner, she’s won a toy shopping spree.

Dawn then has a moment where she realises how unfair pageants are, just as Mallory and Jessi join them, looking smug.

“Don’t say it,” I said to them. “I know. We all should have listened to you guys on the day the newspaper article came out.”
“Well…” said Mal, and I could tell that she and Jessi were dying to gloat.

Jeff gets into a couple of fights at school before Mrs Schaefer starts discussing altering the custody agreement that would allow Jeff to return to his father. Dawn is horrified at this prospect, not wanting her family to be split down the middle, and distracts herself constantly from the fact that her little brother wants to leave them by focusing on the pageant.

Jeff returns to California the night before the pageant, all grins and excitement, while Dawn and Mrs Schaefer see him off at the airport, crying and hugging each other as soon as he’s gone.

This was a really poorly-placed subplot. It didn’t compliment or relate to the silly, jealousy-fuelled pageant arc in any way. I can guess that AMM wanted to offset the humour with something serious, but really! Did not work.

To outfits…if there were any! While the book is full of costumes and party dresses, from sailor suits to tutus, Dawn doesn’t describe what any of the BSC are wearing at all! Ugh, c’mon, Dawn, get with the program!

It takes all of the girls, especially Charlotte, a long time to get over the pageant. Claudia is horrified that she, as she puts it, forced Charlotte to enter, and Kristy and Mary Anne console her by admitting that they sort of did the same thing with Myriah and Karen.

Then they all have a laugh about it.

Next book is the first Jessi book; Jessi’s Secret Language.

Want to read about a bunch of 13-year-olds turning into green-eyed monster pageant mums? You can get Little Miss Stoneybrook…and Dawn for Kindle on Amazon for under $5.