Jessi’s Secret Language is a really difficult book to review, because most of it is so sugary sweet it would put Stacey in hospital for a serious amount of time. If I review it with a snarky tone, I’m feel like I’m being a Big Bad Person. If I just review the contents, it sounds like a 10-year-old’s book report. 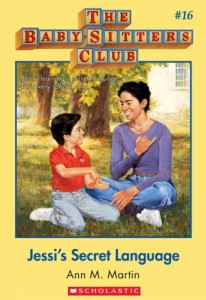 So what to do? The whole point in starting this reviews journey was to try and remember what it was that I loved about this series when I was a pre-teen, and in Jessi’s Secret Language it’s easy to find one of the reasons I did.
In it, our new girl Jessi Ramsey, a girl who has barely been accepted by the community herself, does everything she can to ensure a family who has a child with a disability are accepted by their new community.

As a pre-teen, I’m certain I would have found this storyline inspirational. It’s the sort of thing that would make any little kid strive to do things because they were the kind thing to do, not because they’re easy and not because you get anything out of it yourself.
As a cynical 33-year-old, I have to admit I rolled my eyes an awful lot in this book. In a way that made me embarrassed about rolling my eyes, because it is supposed to be a book for those who can believe in this sort of community-feelgood mush still.

Anyway, after the structural roller coaster and idiocy of the older BSC girls in Little Miss Stoneybrook…and Dawn, it was a very strange book to go move on to.

We start with a BSC meeting – the way a few of the latest books have – giving Jess ample time to introduce the members in what is now (thankfully) Traditional Chapter 2 style.
As we’d expect, after the introductions, Claudia offers junk food (Double-stuf Oreos and Ring-Dings) —

— then, Kristy calls the meeting to order:

“Okay,” said Kristy, clapping her hands together. She swallowed the last of an Oreo. “Any club business? Anything urgent?”
“The treasury’s low,” spoke up Dawn.
“How’d it get low?” asked Kristy.
“Mostly paying Charlie to drive you to and from the meetings.” 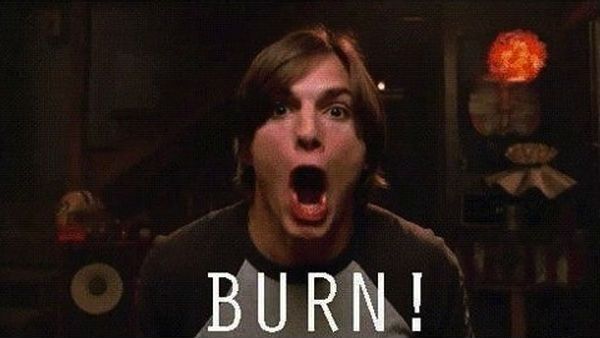 Kristy’s solution to this is to ask everyone to kick in double dues next time. 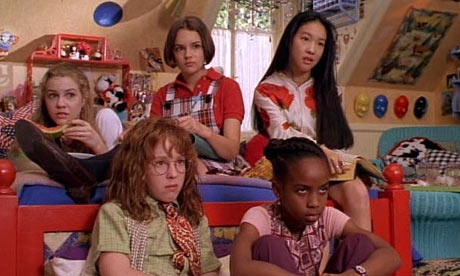 The phone calls start coming, and the BSC take on some new clients; the Braddock family. The charges are nine-year-old Haley and seven-year-old Matt, and lengthy discussions are had with Mrs Braddock, who requires a regular afternoon baby sitter. Her boy, Matt, happens to be deaf, and so any babysitter they hire would need to commit to learning Ameslan (some American version of sign language).
Jessi takes the job, apparently being the most proficient in languages. She reasons this, somewhat, to her ballet abilities, which she says a few times is a form of language in itself.

Jessi’s first sitting job for Matt and Haley – our introduction to the Braddock family – painted a bodacious stone-washed picture of late-80’s styling that made me almost forgive this book for never mentioning what the BSC were wearing at any point:

The door was answered by a pixie of a girl who must have been Haley, but who looked small for nine. Her blonde hair was cut short with a little tail in the back (very in) and her brown eyes were framed by luscious dark lashes… 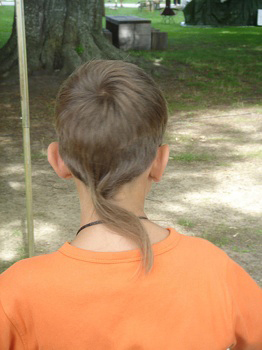 …As soon as I stepped inside, I was greeted by Mrs Braddock. She looked like a nice, comfortable kind of mom to have. She was wearing blue jeans and Reeboks and a big, baggy sweater… 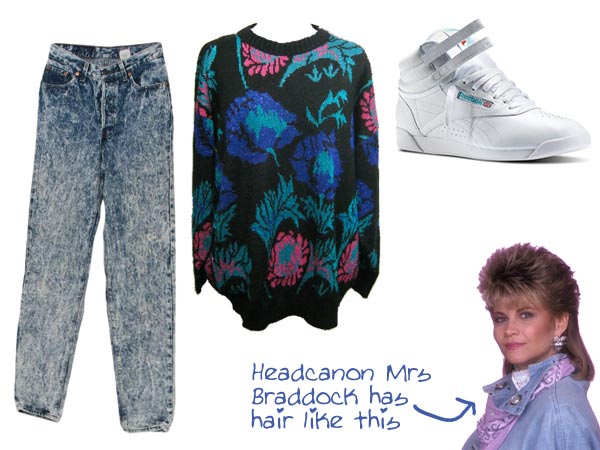 Jessi learns pretty quickly that sitting for Matt is kind of easy – Matt goes to a school that meets his needs, his parents and sister can communicate with him, and he’s just another little boy who wants to play baseball.

Haley is a bit more of a handful. She has outbursts where she’s outright ashamed of her brother, verging on jealousy for all the special treatment he gets – but they are short-lived. Jessi’s grand plan of getting the Braddock’s accepted starts with half the neighbourhood (i.e., the Pike Clan and the Barrett kids) eagerly wanting to learn this “secret language” that Matt and Haley know, so they can sneakily communicate with not only Matt, but also each other.

“…if, like, Mom and Dad punished you and said, ‘No talking for half an hour.’ You could talk and they’d never know it.”

So, that all goes swimmingly. 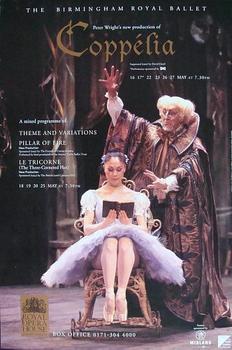 The sub-plot revolves around a ballet performance that Jessi has won a major role in – Coppélia. Jessi is playing Swanhilde, and each baby-sitting chapter is offset by a chapter set at the ballet studio.
Jessi is working her butt off for the role, and a couple of bitchy girls in her class dig into her for being the teacher’s pet a few times – apparently Madame is notorious for giving special treatment to the youngest girl in the class, and (surprise, surprise) one of the bitchy girls was the favourite youngest prior to Jessi’s arrival at the school.

After rehearsal one day, Jessi sees Katie Beth, one of the bitchy girls, outside with a younger girl – her little sister – and notices that the younger one is using sign language frantically saying she needs to use the bathroom, and is being completely ignored by Katie Beth. The little sister – Adele – is deaf, and Jessi steps in and says/signs she can use the bathroom in the studio.

Once Adele runs inside, Katie Beth is kind of agog that Jessi understands her – because nobody in Katie Beth’s family knows sign language. Jessi has a moment of realising how lucky Matt is, for having a family so determined to include him; and realises that if people made any effort, hearing impaired people wouldn’t need to be excluded from anything.

Jessi hatches a plan and with the support of…pretty much everybody, everywhere. She hi-jacks her ballet school’s production of Coppélia, invites Matt’s class from school and turns it into an interactive event, where scenes are first explained in sign language by Mrs Braddock and Haley, and then danced by the troop.

There’s lots of tears, hugs, and all round good feelings by the end, as Matt goes on stage with a bouquet and hugs for Jessi, and Jessi spots Adele in the audience, too. After the show, Katie Beth says she’s going to learn sign language so she can talk to her sister.

Mrs. Braddock took a seat in the back of the room, and Ms. Frank led me to the front of the room.
“Why don’t you sit on the floor with the kids?” she suggested. “You’ll all feel more at ease.”
(Good thing I was wearing jeans.)
Ms. Frank, also wearing pants, sat right down on the floor next to me. (Now that’s my kind of teacher.)

Anyway it’s all very sweet, all ends well, and I’m sure Jessi’s just secured a whole bunch more clients for the BSC.
Can I move onto the next book now please? Mary Anne’s Bad Luck Mystery sounds like the perfect antidote to all this sweetness – because if this re-read has taught me anything, it’s that Mary Anne is far from sweet!

If you’re interested in reading Jessi’s Secret Language for yourself, you can get it for Kindle for around a fiver on amazon.