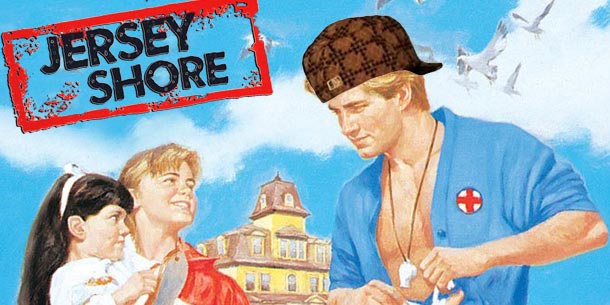 If you saw an eighteen-year-old lifeguard continually pay skimpy-bikini-wearing thirteen-year-old girls compliments like “Hi, love.” and “Sweetheart, did anyone ever tell you you’re beautiful?”, what would you do?

I know what I’d do. I’d call the police on the lecherous cretin.
Not our Stacey, who, as the title of the eighth book in the Baby-Sitters Club suggests, goes a little boy-crazy in this one. 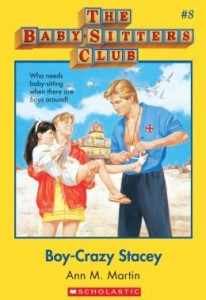 If this is Scott, he is LYING about his age.
ARGH, BREAK HIS SMOULDER, STACE!

In Boy-Crazy Stacey, the Pike family take their annual family holiday to Sea City with two extra children – Stacey and Mary Anne – as mother’s helpers. Stacey and Mary Anne are charged with looking after Mallory (eleven), Alvin, Simon and Theodore (Wait. No, sorry. I mean Adam, Byron and Jordan, who are ten), Vanessa (who’s nine and speaks in rhyme all the time), Nicky (eight), Margo (seven), and Claire-silly-billy-goo-goo (five).

Fun Fact: Sea City is based on a real place called Surf City, where Ann M Martin used to go on family holiday when she was a child.
Ok, not that fun. Just a fact, then.

Having Mary Anne and Stacey along means that Mr and Mrs Pike can offload their eight children on the girls every day, and can go out on their own to places like Atlantic City, whenever they want.
Now, I don’t know much about America, and when I was reading the Baby-Sitters Club, I thought the US consisted of New York one side, California the other, and Stoneybrook somewhere in the middle, but isn’t Atlantic City a smaller, beach-ier Las Vegas? Are the Pike’s compulsive gamblers? Every time they lose a bet, do they have to have another child? That they’d rather head there than spend their family vacations with their actual children concerns me a mite, though I guess if I had a five-year-old who appended “silly-billy-goo-goo” to everyone’s name, all the time, I’d probably run for the nearest casino and try blank it out with free pineapple daiquiris, too.

Back to the boys that drive Stacey crazy. It’s while Stacey and Mary Anne are minding the Pike children on the beach that Stacey spots two lifeguards; one with dark, curly hair and the other with wavy, blonde hair:

As the blonde one leaned over to fold his towel, the sun caught his hair, making it gleam. And at that moment, he glanced up. He saw me looking at him, and gave me a smile and a little wink.
He was gorgeous. Absolutely gorgeous.

He turned back to his towel and I let out my breath in a shaky gasp.
“Oh wow,” I whispered to Mary Anne. “I’m in love.”

Stacey notices fairly quickly how popular blondie (Scott Foley) and the other one (Bruce) are with girls her own age; there’s a gaggle of tweens crowded around their lifeguard stands almost continually, who do ‘favours’ for the older men (WHAT), those documented being the innocent tasks of bringing them sodas and making them sandwiches. She also notices that whenever slightly older girls walk past – girls that are in high school – the two lifeguards stop paying attention to their harems, and watch the passer-bys instead. 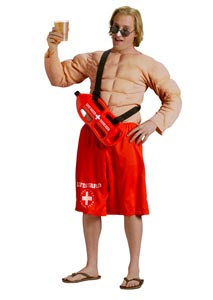 What the fuck, Scott and Bruce? How do you two live with yourselves, you creepers?

Stacey, in her own, er, sophisticated manner, manages to beat the other tweens off and secure exclusive harem girl rights over Scott:

Oh, Stacey, you silly-billy-goo-goo.
Scott’s behaviour is deplorable. He encourages Stacey’s crush, goading her into getting food and drinks for him, calling her “beautiful” and “love” and “princess” too many times, and gifts her his whistle one afternoon (ARGH! Subtext, begone! What the hell?!), all of which our little Stacey sees as signs of true love.

I found a piece of shell and carefully printed:
STACEY + SCOTT = LUV
Then I ran back to the house before a wave came in. I didn’t want to see the words wash away.

Bleh. Hand over the Pike’s barf bucket, thanks.

Mary Anne quickly becomes frustrated with Stacey, who instead of helping her to look after the Pikes, spends her days on the beach hanging around Scott’s lifeguard post and running errands for him. But Mary Anne’s not as alone as she thinks she is. There’s another mother’s helper on the beach every day – a nerdy boy (according to Stacey), called Alex. Alex takes a shine to Mary Anne and helps her by keeping an eye on the Pike Clan, his own three charges, and manages to raise Mary Anne’s spirits to a level where she’s confident enough to ask him out by the end of the book.

Whuuuuuuuut? Nooooo, Mary Anne, you are supposed to be saving yourself for Logan Bruno!

Stacey and Mary Anne spend the book going between not talking to each other and being BFFs. During one of their two nights off, they hit the Sea City night life dressed to what thirteen-year-olds consider the nines:

I put on a white cotton vest over a pink cotton dress and tied a big white bow in my hair so that it flopped over the side of my head. Mary Anne couldn’t find anything of her own that she really liked, so I loaned her my yellow pedal pushers, a yellow and white striped tank top, and an oversized white jacket. 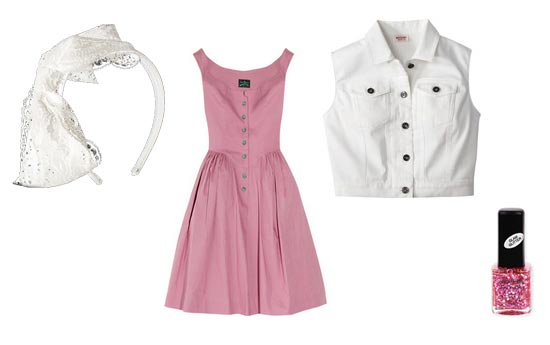 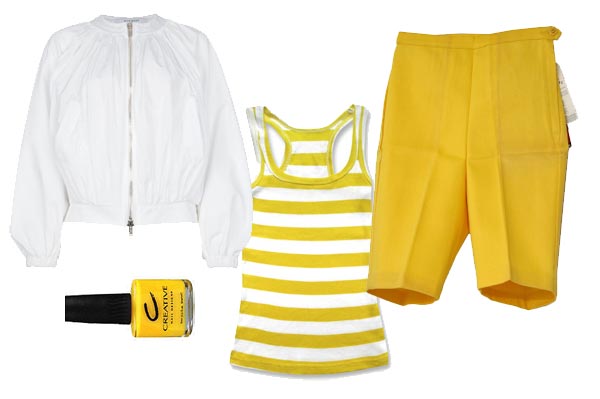 After dinner and arcade games, Stacey decides she wants to buy Scott a present, to show him how she feels about him; a gigantic satin box of chocolates. It’s at this point she spots Scott kissing an older girl on a bench seat. She throws the box down, has a dramatic “are you happy now?” moment to Mary Anne, and runs away crying.

The only other BSC member who makes a worthy appearance in Boy-Crazy Stacey is Kristy – who’s personality flip-flops around again. She goes from sitting on the porch reading People magazine in cut-off jeans and a ratty old white t-shirt with bare feet, to having clip-on earrings and nail polish that Stacey mucks around with. This all happens during the dinner the BSC have at Watson’s manor – Kristy’s new home – prior to splitting up for their various summer vacations (Dawn goes to California, Claudia goes to a mountain resort in New Hampshire, and Kristy stays home).

This really weirded me out; the prospect of not seeing each other for two weeks reduced them all to tears? Was I like this when I was thirteen? What the hell?

Kristy’s other appearance is wedged into the book between the sun, surf and scumbag lifeguards of Sea City – a baby-sitting job I remembered from childhood, where Karen and Andrew wash Watson’s car with steel wool. Ahahahaaa, oops.

But it’s okay; now Watson can paint it purple, like he’s always wanted to.

Outfits are a bit different in this book – most of the time it’s swimwear, though after Mary Anne gets sunburned she spends the rest of the trip in a long-sleeved caftan (kaftan?), Boston Red Sox cap and sunglasses. Prior to that is Mary Anne’s first bikini, which Stacey is quick to note (not to her face) is nowhere near as filled out as Stacey’s own skimpy yellow bikini…because showing off more boob is a critical thing when you’re baby-sitting children. What/why, Stacey?

Stacey has a couple of choice outfits, the most memorable being the one she carefully selects to wear to Watson’s:

I changed my mind six times before I decided on this new pink shirt I got the last time we went back to New York City to visit friends. Big, bright green and yellow birds were splashed all over it. It was gigantic, so it would be cool. I put it on with a pair of baggy shorts, looped a wide green belt around my middle, and hunted up some jewellery – silver bangle bracelets and a pair of silver earrings shaped like bells that actually ring when they dangle back and forth. 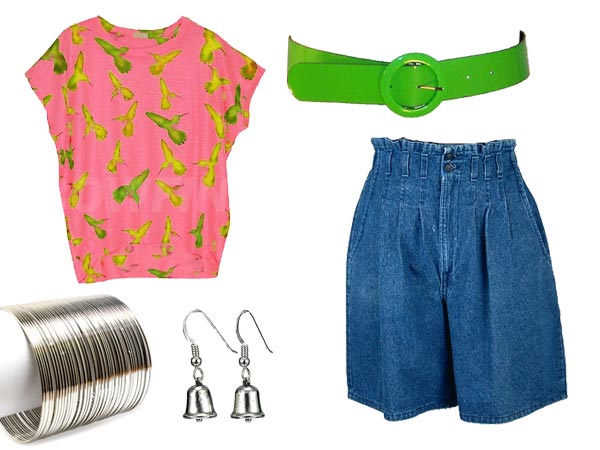 Ok ok, back to the beach. After Stacey has her little heart broken – again – she pays more attention to her charges, to Mary Anne, and to spending quality time with the family at the beach. This is all made easier thanks to Toby; Alex’s cousin.

He was about fourteen years old. (Perfect!) His brown hair was sort of waved back from his face. I was glad I could see his eyes, because they were a beautiful deep brown, almost velvety looking. A handful of freckles was sprinkled across his nose and cheeks. He was wearing plain white swimming trunks, but his shirt was amazing – tan with silly pictures of cowboy boots and cactuses all over it. And his sunglasses – black bands with narrow slits from side to side to see through. Totally Cool. 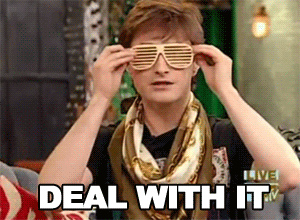 Toby is interested in Stacey from word “how you doin’?”, and tails around after her, telling jokes and helping her sitting charges make sandcastles, because this is ordinary behaviour for fourteen-year-old boys trying to impress girls at the beach.

…did I mention the boy’s a comedy genius? 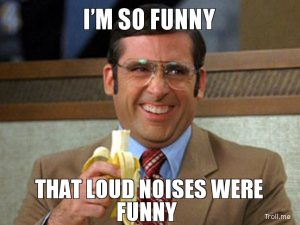 Sadly, though, Stacey’s met Toby on her second-to-last day in Sea City. This doesn’t stop them going on a double-date with Mary Anne and Alex, or – how 80’s is this – going through the Tunnel of Luv and getting her first kiss.
Stacey – you met him yesterday, dearest.

I stooped down and picked up a piece of driftwood. Then I found a flat patch of wet sand and wrote:
STACEY + TOBY = LUV
I watched and watched, but the waves didn’t wash it away.

Sorry, Pete Black – you were convenient, but THE SEA HAS SPOKEN. 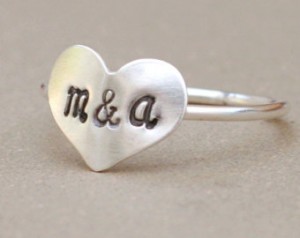 Stacey and Toby promise to write to each other. Mary Anne and Alex exchange rings (seriously. They get plastic rings made up with their initials on them. I just…don’t even) as well as addresses. They pile into the Pike’s station wagons, and head back to Stoneybrook. End vacation.

Is there some hidden message in Boy-Crazy Stacey? The baby-sitting side of things with the Pikes outlines random adventures at miniature golf and Gurber Garden (another Claire-ism) and the boardwalk.
The only lesson-y bit happens when Stacey finds out Byron is scared of the water, but I can’t fathom how that could relate to the asshat lifeguards. This book has a different formula to the seven before it – not being set in Stoneybrook for one, but also not including more than a peep out of Claudia or Dawn.

It feels like AMM wrote it because she wanted to reminisce about her childhood holidays, or perhaps wanted to get back at a douchebag of a lifeguard she had a crush on one year. Because, really, this is a book for tweens, and she makes Scott and Bruce out to be complete tools. I doubt her message is ‘don’t trust lifeguards, kids!’ Maybe it’s her way of passing on a warning about older men’s whistles (subtext. SUBTEXT) to boy-crazy thirteen-year-olds like Stacey.

Next book is a Dawn one – The Ghost at Dawn’s House – which if I remember correctly, I still have floating around in hard copy somewhere. Woot! A Dawn book – break out the celery sticks and granola!

Read about Stacey’s adventures with Scumbag Scott for yourself – Boy-Crazy Stacey, kindle edition, is on amazon for about $4.