Claudia and the Bad Joke starts out with Kristy commenting:

“You know,” said Kristy Thomas, “I have never been hit in the face with a pie.”
“Imagine that,” I teased her. “Sweet thirteen and never been hit. What a tragedy.”

This somewhat oddball opener progresses into an in-depth discussion, for a good few pages, where each member ponders over whether they want to be hit in the face with pies (Mal, practical as ever, quips: “It would depend on the kind of pie”).

Didn’t we already do this…?

The pie discussion takes place while the BSC are at a free slapstick film festival. Everyone’s there, even Logan, who remains quiet on the topic of pies to the face, giving Kristy a look as if she were crazy. Which is a little odd in itself, because Logan’s usually up for Kristy’s random, sometimes disgusting, food-related chatter.

One of the films start, and while the BSC and what sounds like all of Stoneybrook’s kids are launched into a “hilarious” short about a man blowing out the candles on an elaborate birthday cake and having the cake explode in his face, Claudia launches us into a chapter-two-style introduction. In case we’ve forgotten, we’re reminded that Kristy has a big mouth and a big family; Mary Anne is shy, sensitive, and has a strict father (liar!) and then we get to Claudia’s description of herself:

I might as well just come out and say it – I’m one of the coolest-looking kids in Stoneybrook Middle School.

And we’re treated to a typical Claudia outfit:

I wear wild clothes, such as baggy pants and sweaters, high-top sneakers, and jewelry I make myself. For instance, at the film festival, I was wearing earrings made of wooden beads that I’d painted. 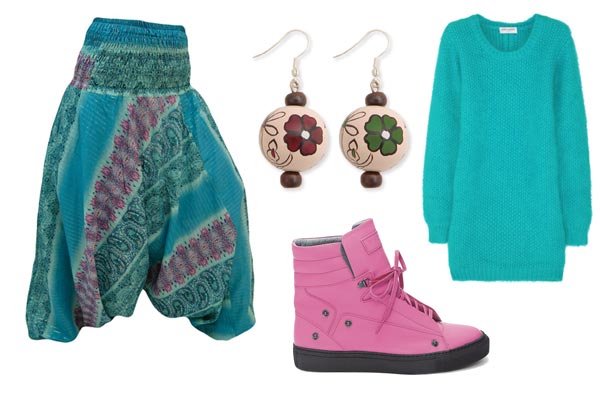 So, not even a chapter in, and the book’s backstory obligations/expectations are already met.

On with the show, then.

The slapstick film festival may have just seemed like an innocent afternoon’s free entertainment, but it winds the kids of Stoneybrook up into a prank-pulling frenzy. Most of the pranks are fairly tame and lame – most are failed prank phone calls, to be honest, about refrigerators running and the like. The Pike clan whisk Mary Anne and Jessi away for a wild afternoon of prank-tastic baby-sitting – from Margo jumping out and shouting “Boo!”, to Nicky’s handshake buzzer, to the triplets covering a tennis ball with chocolate (I don’t know). The baby-sitters are harmlessly pranked, time and time again.

Then eight-year-old Betsy Sobak, a new client, happens to Claudia. According to some kids at Stoneybrook Middle School – two nobody’s called Diana Roberts and Gordon Brown, who used to baby sit for Betsy – they gave up sitting for her, because she is an incurable practical joker. So, Claudia (rightfully) approaches the job with a little caution.

In a moment, the door was opened by a friendly looking girl with brown hair, which had been pulled into two ponytails and tied with big blue ribbons. She was wearing a very snazzy pair of red pants that were held up by red suspenders. Under the suspenders was a blue-and-white-striped T-shirt. The legs of her pants ended in cuffs, and on her feet were running shoes tied with purple laces. 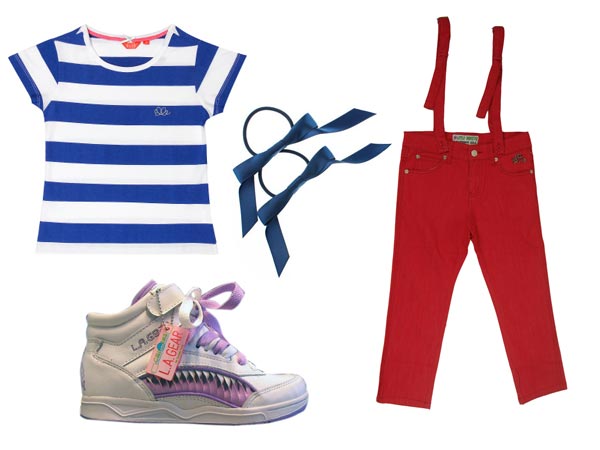 I don’t usually bother with the kid’s outfits, but we were short on Claudia – or anyone else’s – outfit descriptions this book. 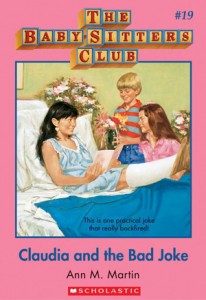 Betsy seems okay at first; a nice, ordinary little girl. But, as the sitting job progresses, Betsy’s antics include:

If this had happened in 2014 (or 2004…or 1994, for that matter), the Kishis would have sued the Sobaks, wouldn’t they? The doctors insist on keeping Claudia in hospital for a week (in “traction”?). Claudia is petrified – her dislike of hospitals stemming from memories of the last time she was there, when Mimi had a stroke.

Claud’s hospital time progresses and she has a stream of visitors – family, BSC members, BSC clients, even some school teachers. Mary Anne, in her “wisdom”, sneaks her kitten Tigger in for a visit, too. But no mention of or visits from Betsy Sobak, the remorseless little sod.

The time in hospital gives Claudia time to think – about the accident, and about how much worse it could have been. What if she’d broken her arm – what if it had been so bad she couldn’t have used it again – and had to give up art?

In one of her (many) phone calls to Stacey, she voices this concern, and says she’s considering dropping out of the Baby Sitters Club – just to be safe.

After leaving hospital, Claudia has to spend a week at home and has Mimi there for support and guidance and lovely Mimi wisdom. For example after Claudia tells her she’s scared to baby-sit again:

Mimi looked thoughtful. “What is really scary,” she told me, “is to think we do not have control. Cannot keep accident from happening. Or stroke from happening.”

Claudia decorates her cast herself, out of a mixture of boredom and artistic pride. There are a few additions from the BSC members, such as Mary Anne’s —

Eventually, at a club meeting one afternoon, Claudia tells the girls that she wants to drop out of the Baby-sitters Club.

The phone did ring then, but we didn’t all dive for it, like we usually do. Kristy picked it up after glaring at me for a moment and arranged for Dawn to sit for the Perkins girls. Then she turned to me. She looked as if she was about to let her mouth go on a rampage…

At that same meeting Mrs Sobak calls and wants another sitter (for her daughter to torture). Mal says she wants to take it, and plans on giving as good as she gets.

Kristy’s not sure of the idea (“Playing tricks on a little kid…I just don’t know. It seems sort of mean. On the other hand…”), but after a minor discussion, and the fact that this child has made Claudia question her position in the BSC, the girls end up declaring an unofficial joke war on Betsy Sobak.

Mal and Dawn both have sitting jobs with the brat, where sitter and sittee prank each other relentlessly. Mal tries out tricks that the triplets have tried on her (sneezing powder, a rubber slug, a realistic-looking furry rat). Dawn consults Jeff over the phone for his advice, prior to her job: 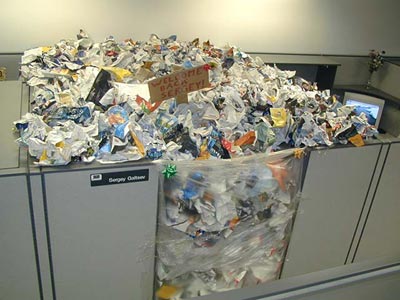 We’ve all been there…

After each sitting job though, the girls feel like Betsy’s still got the upper hand.

The last brother brought in as prankster consultant is “the big guns”, Sam Thomas, who Kristy has help her with a battle-plan prior to her sitting job for Betsy, where she’s taking her to see Chitty Chitty Bang Bang at the cinema.

The advice he gives her seems to be for Kristy to switch seats at the movies, while Betsy goes to get popcorn, giving Betsy a moment of panic that she’s been abandoned. Then, Kristy stashes a fake bloody thumb Sam lent her in the popcorn for Betsy to find.

This makes Betsy scream, which makes some other kids in the audience who Betsy has pranked pipe up laughing. These kids then call her out on pranks she’s pulled on them in the past, and Betsy is sulky, quiet and prank-less from then on.

So…Sam’s advice, overall, seemed to be to embarrass and shame Betsy into silence.

After the movie, which Betsy is continually harassed in and after, once the kids she’s pranked realise she’s there, Betsy asks Kristy if she tricked her because of Claudia’s leg. To which Kristy says, in a round-about way without actually saying yes, “yes”. Then they go visit Claudia, and after-school-special apologies all around: Betsy is sorry for what she did, Claudia is sorry for wanting to quit the club when she was just (apparently) embarrassed about what had happened. Case closed, no harm done.

Except for, you know, the broken leg, weeks of missed school, and physical therapy sessions Claudia’s going to have to have for a while.

What I don’t get is why nobody discussed Betsy’s pranking problem with Mrs Sobak. Does the BSC need this client so badly? Dawn was brave enough to sit down and tell Mrs Barrett that she wouldn’t sit for her kids any more unless she herself started being a better mother (more or less). So having the BSC go from doing the ‘responsible’ thing – advising the parent of the very real issue their daughter has, and the problems that her behaviour caused – to fighting fire with fire? Weird.

What’s more disconcerting is that – you cannot hide the fact that your child deliberately put her baby-sitter at risk from a parent. Not once there are ambulances, doctors and insurance involved. How did Mrs Sobak not react with a little more…I don’t know, concern about the situation? And about the fact that her daughter didn’t genuinely – at any time – seem to show remorse for what she’d done (until she’d been given a very hearty dose of her own medicine)?
What, did she think it was Claudia’s fault that she’d ended up in hospital? I don’t get it. Badly done, Mrs Sobak.

Oh and – randomly – Ashley Wyeth and Claudia have a few conversations! First only for English assignment questions, but later, Claudia discusses that she’s considering quitting baby-sitting with her (Ashley is thrilled by the idea – because Claudia could take so many more art classes).

The point is – Ashley is still around, somewhere! Perhaps there’s hope for the Shillaber twins yet!

Junk food wise, we have:

…a Butterfinger bar in the drawer of my jewerly box, a package of Double-Stuff Oreos in a shoebox labeled PANT BRUSHES (so I’m not a great speller, okay?), and I knew – I just knew – there was a bag of Doritos somewhere under the bed.

Claudia also offers something called a Tootsie Roll to Betsy, when Kristy brings her over to apologise. Yes, because what this 8-year-old needs is sugar: 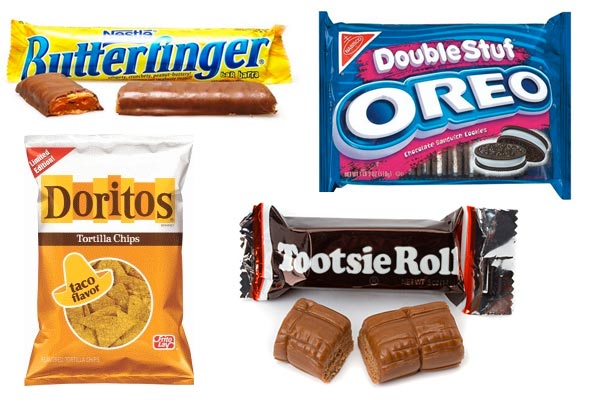 The book’s final chapter starts with Claudia having her cast removed, two months later, by none other than Dr. Rivera — 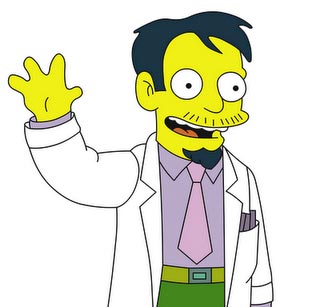 — and Claudia panicking at the thought of her leg getting cut off by the buzz-saw like implement that he’s removing it with.

Then we’re off to a BSC meeting, where Jessi reports that she sat for Betsy Sobak, and while she didn’t pull any pranks on her, there was a catalogue in the demon-child’s room for “Squirmy’s house of Tricks ‘n’ Jokes”. Goodie. So, after all that, the kid er…learned…nothing? Righto.

“…we have had a major problem with practical jokes lately. And Sam won’t quit goof-calling us, but…”
“Yeah?” I prompted her.
“I still wouldn’t mind getting hit in the face with a pie!”
I sighed happily. Everything was back to normal.

Next up is Kristy and the Walking Disaster — ooh! Wait, is this the one where we’re introduced to Bart?

Want to experience Betsy’s un-funny pranks for yourself? Claudia and the Bad Joke, kindle edition, can be bought on Amazon for around $5.