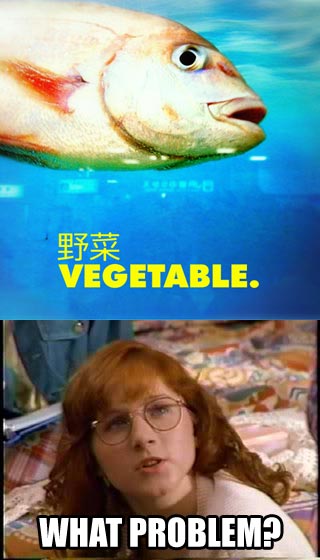 That’s right – my childhood hero, who taught me that it was ok to be a vegetarian if you wanted to be, eats tuna in book nine of the Baby-Sitters Club: The Ghost at Dawn’s House.
It’s all Mallory Pike’s fault, and Dawn just goes with it (she’s into “health food”; it’s never explicitly said she’s a vegetarian in this book. Sigh. Continuity, people!).

The Pike family are getting a lot of screen- page-time of late, considering Boy-Crazy Stacey took place in Sea City on the Pike’s annual vacation. Anyone would think that Ann M Martin was setting up for the tuna-sandwich-making red-head’s induction into the Baby-Sitters Club. A lot of good she’d do looking after children; the eleven-year-old doesn’t know that fish is an animal. Maybe she got confused with her surname–

All: enough about the sandwich! 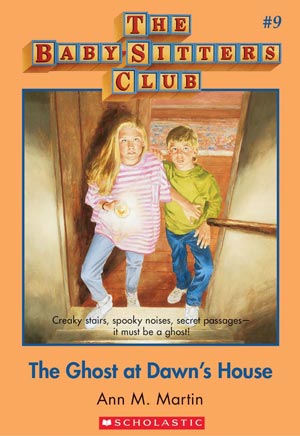 Dawn Schaefer loves ghost stories, and spooks herself silly reading them late at night in her old house, which was built in 1795 or something. Convinced that a house as old as theirs would surely have secret passages somewhere, she invites the BSC around to search the house, top-to-bottom, for hidden catches and hollow walls.

They find nothing, and Dawn gives up for a while. But then, one afternoon, Dawn is reading in the barn, and falls through the floor into a strange kind of cellar. The ground is made of hard-packed dirt and there’s a ladder that leads back up to the level she just fell from; she’s broken through a trap-door into a secret room in the barn! 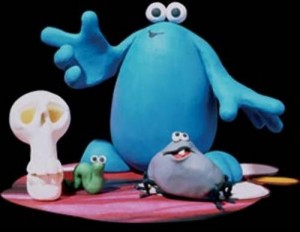 There is also a passageway, leading back toward the house. Armed with a torch, Dawn follows the dark, earthy path, which leads to a staircase and a closed latch, which, when unlatched reveals…her bedroom?

Dawn has found the secret passage and it was in her room all along.

Exploring the passage a little more, Dawn discovers some out-of-place objects; a key, and a really old looking coin. On later explorations, she finds a crushed-up ice-cream cone, and a few other things. This, and the weird noises she hears from the passage now and then, leads Dawn to the conclusion that the secret passage is haunted.

History lends a hand to Dawn’s haunted theory when she finds an old book about Stoneybrook(e) that her grandparents gave her mum. It talks about an family who lived in Stoneybrooke in 1810, who moved out of the old farm house. Their son refused to leave, calling to them from the house, and when the townspeople went to check on him later, the son, Jared Mullray, was gone. The townsfolk said that he was hiding somewhere, because they would hear him occasionally, and rumour had it that he died, hidden away wherever he was, refusing to leave Wood Acres.

Spooked out of her brain but loving it, Dawn spends the rest of the book dashing through the tunnel finding weird objects, and running out of it, too scared to stay in her room and sleeping in the lounge instead.

The more disconcerting matter in The Ghost at Dawn’s House – aside from the tunafish sandwich – is that Dawn’s mum Sharon is dating someone other than Ritchie Spier! Gasp! What is this nonsense?

Dawn’s grandparents may not have been as thrilled with Ritchie’s transformation from love-struck teenage boy to responsible widower lawyer as I first thought, because they’ve set her up with a man called Trip in this book.

No, that’s not a typo. Dawn’s mum really dates a guy called Trip.

“I bet he wears pink socks and alligator shirts and his friends call him, like, the Trip-Man or something.”
“I bet he plays golf,” said Jeff, with a snort of laughter.
“I bet his idea of an amusing afternoon is balancing a checkbook. And,” I added, “I bet he has real short hair, wears wire-rim glasses, and has gray eyes, but wears contacts to make them look blue.”

Heartbreak aside, I need to go back to Mallory Pike for a second. She’s become the Pike’s second baby-sitter whenever Mr and Mrs Pike need to run out to the casino/family planning clinic, and I have to wonder how power-hungry Kristy lets this slide without even a passing comment. Mallory herself is a blank canvas at this point; we know nothing of her ambitions to become a writer, or her dissatisfaction with her appearance, or even her friendship with Jessi Ramsey. Truth be told, we know more about her siblings – Vanessa Pike wants to be a poet; Adam, Byron and Jordan are friends with Jeff, Dawn’s brother; Nicky Pike feels left out because he wants to play with the triplets, the only other boys, but they don’t want to play with him.
Mallory is just…there. Her ambitions appear solely to be to baby-sit her brothers and sisters, and make non-vegetarian food for a vegetarian.
I can’t tell if AMM wants us to like her or not.

As for clothing descriptions this book; nada. This is the second Dawn book, and she’s yet to describe what Claudia’s wearing properly. Get with the program, Dawn!

There’s a brief description of a ring she bought on holiday:

Claudia held out her hand and showed us a ring with a fierce, green dragon’s head on it.

We also get a glimpse of Claudia’s hollowed-out book, which she hides sweets in (this time: chocolate kisses). The very idea of hiding secrets in a book when I was little seemed like the most awesome idea in the world.

The Ghost at Dawn’s House heralds the introduction of a kid called Cam Geary, who Mary Anne is crushing on. Mary Anne has gone from refusing to go to dances specifically because she has no interest in boys, to reading Sixteen magazine to ogle over some … – singer? Actor? I don’t know – in a matter of months.

Timely interest in boys is timely. Mary Anne is so taken by whoever this random sudden superstar kid is that they distract her from not being able to watch Sixteen Candles immediately (Gasp! Actual reference that can be used as book dating evidence!) by telling her that with a little more makeup, they can make Mary Anne look like Corrie Lalique – Cam Geary’s girlfriend. 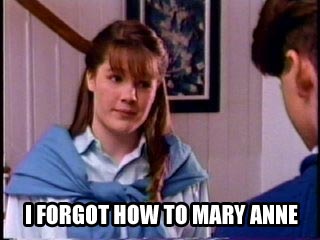 Hands up who else has Googled Cam Geary to check if he’s a middle-aged out-of-work actor who was vaguely popular in the 80’s? *hand shoots up*
Twitter’s real, right?

The unsolved mystery of Jared Mullray isn’t completely solved. Half of the stuff dropped in the passage turns out to be the handiwork of Nicky Pike, who wanted somewhere to hide out when the triplets wouldn’t let him play with them, but a few of the items – and noises – from the passage are still unaccounted for by book’s end. But through the power of slumber parties, Dawn decides that with only a few more days until eighth grade starts, she doesn’t want to waste any more time worrying about a 200-year-old dead guy who haunts a passage that leads straight to her bedroom.
I mean, duh! Not when there’s more important things to do, like having a gossip-fest, going to the mall, or playing tennis.

I can’t wait to see how much tennis gets played in the next book; Logan Likes Mary Anne, where I’m gathering the girls will go back to school and start 8th grade – where they’ll be frozen in time for the rest of their baby-sitting lives (and our baby-sitting journey)…

Maybe in the next book, Ann M Martin will remember that Dawn’s meant to be a vegetarian >:(

The Ghost at Dawn’s House was a tad on the boring side, but nevertheless; if you want to read about Trip-Man, Cam Geary and the secret tunnel for yourself, you can get the kindle version from Amazon for about $4.