Book 3: Stacey vs The Worst 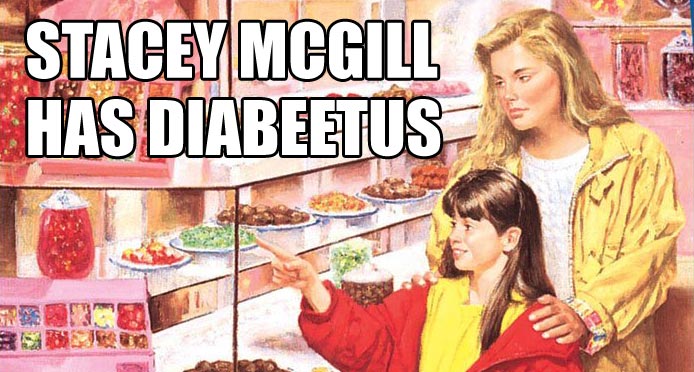 In book three of The BSC, The Truth About Stacey, we visit Stoneybrook, Connecticut during the Holiday Season via Stacey McGill, the boy-crazy blonde one who dots her i’s with hearts. Stacey’s recently moved from New York to Stoneybrook with her parents in order to change the pace of her life and try to deal with Stacey’s newly-diagnosed type 1 diabetes. 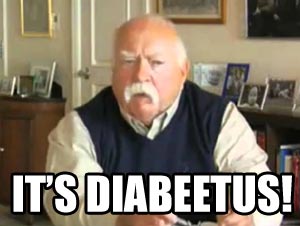 Out of the four original Baby-Sitters Club members, Stacey is the one I remember the least about, so I was interested in this book, wondering if The Truth would be a secret other than her diabetes that I’d forgotten (her diabetes isn’t really a secret since Kristy bullied it out of her in Kristy’s Great Idea. Nice going, Kristy). 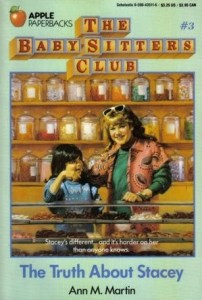 However The Truth about poor little Stacey made me sad. Whether Ann M Martin intended on writing it this way or not, The Truth about Stacey seemed to be that she’s forever apologising to people who have treated her like garbage when she needed their stability and support.

The Truth about Stacey is that her parents, and her old friends in New York, are The Worst, and she continually forgives them for it.

A lot of this book is back-story. When Mr and Mrs McGill found out not only that they couldn’t have any more children but also that their precious only daughter had diabetes, they kind of lost it trying to find ways to cure her. Stacey went to just about every quack out there, nearly being kept back a year at school while her parents dragged her from one miracle worker to the next. She also went to a few real doctors, who did the right thing – reassured her that diabetes was something she could quite easily live with, outlined her diet restrictions, and taught her how to inject insulin to manage her blood sugar. Stacey has a steady paediatrician back in New York who she likes and trusts, called Dr Werner (incidentally, The Truth About Stacey is dedicated to a Dr Claudia Werner. Aww).

If only Dr Werner had prescribed the McGills a chill-pill (heh) at the same time.

Early on in the book, Stacey’s parents announce they’re taking her to some doctor her Uncle Eric heard about on the TV, Dr Barnes.

“What does Dr. Werner think of Dr. Barnes?”
“She doesn’t know about Dr. Barnes yet,” replied my mother.
“Mo-om, I’d like to check with Dr. Werner first.”
“Stacey,” said Dad. “You are not in charge here. Your mother and I make the decisions.”
“Decisions about me, my body.”
“That’s what parents are for,” he said wryly.

Good going, Uncle Eric, you jerk. Why don’t you butt the hell out?

Stacey’s parents insist she be responsible for her health and body but give her no say when it comes to dealing with her disease. While in Kristy’s Great Idea and Claudia and the Phantom Phone Calls I’ve been largely siding with adults and rolling my eyes at the antics of the 12-year-olds, The Truth About Stacey made me mad at the McGills. I know they are doing what they think is best, but they are TERRIBLE here, constantly destabilising their daughter, bribing her with musical tickets and shopping trips so she’ll go along with what they want her to do, and ignoring her pleas that they check all changes to her lifestyle with her doctor first. Stacey could have been written into this series as a spoilt brat, or a nervous wreck, and it would have been believable (and her parents would have been entirely to blame). But she’s not. Stacey whines a bit at them, but for the most part just deals with what she’s handed, in a much better, positive way than the adults in her life.

Back to the back-story for a moment. While Stacey was dealing with her parents freaking out about her disease (you’re frightening your child, STOP IT), she was also dealing with her circle of friends abandoning her in New York, thanks to her once-best-friend, Laine Cummings. Prior to Stacey being diagnosed, she was fainting, getting special treatment from teachers, even wetting the bed (after which the McGills sent her to a psychiatrist. WHAT). Stacey must have been terrified, not knowing what was going on in her own body. But instead of trying to see if she was okay, the leader of their pack Laine decided this change in Stacey (that she clearly had no control over) was grounds to alienate her.
By the time Stacey was diagnosed, she was miserable, lonely and scared. Her parents decided to move out to the country and give her a new start, after a doctor said that a slower pace of life would be good for her.

Stoneybrook was meant to be different. Perplexed by her parents reverting to their pre-Stoneybrook ways of sending her to every random so-called doctor a relative heard about, Stacey turns to a responsible adult she feels she can trust – Dr Johanssen. The mother of her favourite baby-sitting charge, Charlotte. Oh, Stacey 🙁
Dr Johanssen is The Best and manages to deal with the tricky situation. She empathises with Stacey, reassures her that Dr Barnes won’t do anything that’ll harm her; you know, does what a parent should do. Then, she pulls some magic doctor strings, and lines up an appointment with an impossibly-difficult-to-see-because-excellent Dr Graham in New York, behind Stacey’s parent’s backs at Stacey’s insistence that it be a surprise. Dr Johannsen writes a letter to the McGills to introduce the doctor to them anyway, because she feels wrong about not talking to them in person about it first. And of course, after the initial weirdness of discovering Stacey had talked to a client’s mother about her disease, Stacey’s parents do what they’ve always done; accept the advice of a stranger.

So, the character-driven plot revolves around Stacey’s relationship with her parents and ex-friend Laine, ending with apologies from both parties for acting like jerks and Stacey apologising to them for having a problem that caused them to behave like jerks. Ok.

There’s two sort of token baby-sitting threads in The Truth About Stacey. A minor one revolves around Stacey’s favourite kid – Charlotte Johanssen – who is a pretty, smart, lonely seven-year old who is treated terribly by the kids at her school, and who’s bored with her school work. She ends up being bumped up to the next grade, removing her from the mean children and the boring lessons. End sub-plot.

The other deals with sudden competition – The Baby-Sitters Agency, run by (slightly) older girls who find even older sitters for clients. The Baby-Sitters Agency are immediately popular with the parents of Stoneybrook, who seem to want nothing more than to be able to offload their offspring to a teenager until as late as possible every night of the week.

Finding out about the Baby-Sitters Agency results in your typical “we’re ruined” overreaction from the girls. We’re subjected to plan after terrible Kristy plan as they try to get their clients back; plans which include doing housework for parents, reducing their rates to undercut the BSA’s, and forcing BSC members to wear advertising sandwich boards around school (although – cosplay idea! Squee!). They also fake-call the Agency for a sitter, to find out how they work, where Kristy (under the alias of Candy Kane) needs someone to mind her little brother because she has a date with Winston Churchill. 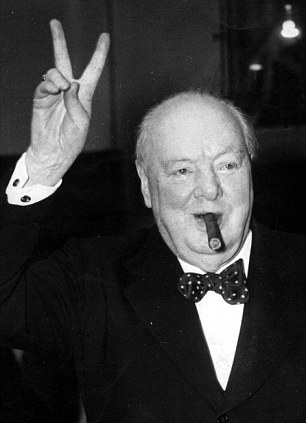 😐 Really? You’re that intent on destroying a little club of 12-year-olds that you send in saboteurs?

Meh. I didn’t care about the BSA at all. The resolution ends up being encouraging their sitting charges to tell their parents how much they dislike their new Agency-found baby-sitters and the parents stop calling them, or something. Didn’t care, and it felt kind of tacked on anyway.

Do the plots align this time around? The Stacey / Charlotte link is glaringly obvious; two little girls who feel lonely and abandoned, who end up being removed from situations not of their own making, because kids are cruel. The Baby-Sitters Agency, though? It’s almost the opposite. Instead of living with the competition and stepping sideways, or finding some way to co-exist, the BSC make it their mission to annihilate the BSA. And after bouts of school-hallway cat-fights and patented Kristy Thomas StrategiesTM, they resort to the only – and most childish – resolution they can: telling on them.

And, alas – no Claudia outfit descriptions this time, though Stacey does buy her a pair of delightful striped leg-warmers for Christmas. 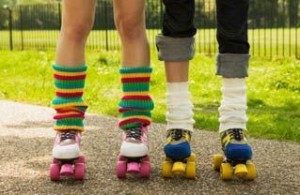 Perhaps to Stacey, Claudia’s fashion statements are normal, so she doesn’t feel compelled to describe everything she wears. We do get a few mentions of Mary Anne’s and Kristy’s attire – Mary Anne magically whips out a pair of wire-rimmed glasses to read with (why have we never seen these before?), and Kristy’s infamous dictatorial visor makes it’s first appearance at a BSC emergency meeting. 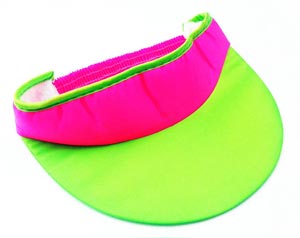 Stacey does mention a few of her own accessories at one point, as well:

They’ve let all sorts of things go by them unmentioned: the dinosaur on my beret, red sneakers covered with beads and glitter, leg warmers covered with footprints, plastic butterflies in my hair. For two week sin New York I even wore red lace gloves with no fingertips.

Though there’s not a single, full outfit description to be seen in the whole book. Poo 🙁
And being a Stacey book, we don’t hear all that much about junkfood; Claudia retrieves Life Savers from a shoe box at one point, and a bag of gumdrops (and a smushed package of Saltines for Stacey) from under the cushion of her arm chair at another.

The Truth About Stacey was for the most part, boring. I wondered if AMM may have already been bored with her characters. But the exasperation I felt over Stacey’s parents, as an adult, made it clear why I would have loved these books when I was the same age as the protagonists. In this book, Stacey is the only reasonable, grown-up one in the face of adversity. And when you’re a pre-teen, you believe that you’re grown up and reasonable, too.

On to Mary Sue Anne Saves the Day, then!

The Truth About Stacey eBook can be yours for about $4 on Amazon – join me in the great BSC re-read!